Oddventure is a game inspired by the Mother series with influence of Undertale and LISA: The Painful. The general idea for this project origins even from before I’ve played those games. But they had surely helped me to choose the (right) direction. Still no idea what to expect? Imagine that Nietzsche has banged Alice from the Wonderland. And their bastard was raised by the Grimm Brothers playing the titles above. Sounds… ODD?

Yep. That's what Oddventure is.

Anyway I’ve finally decided to give this article thingie a shot. So I started with big one.
I'd like to share with you some of the first progress I've been making over the last few weeks. It's on a more serious note, but no worries! I can't help myself not to crack a joke or two :)
What a long and strange road it’s been… When started this project I knew that it would require a lot of determination, time, coffee, sacrifices, willpower and, again, coffee. 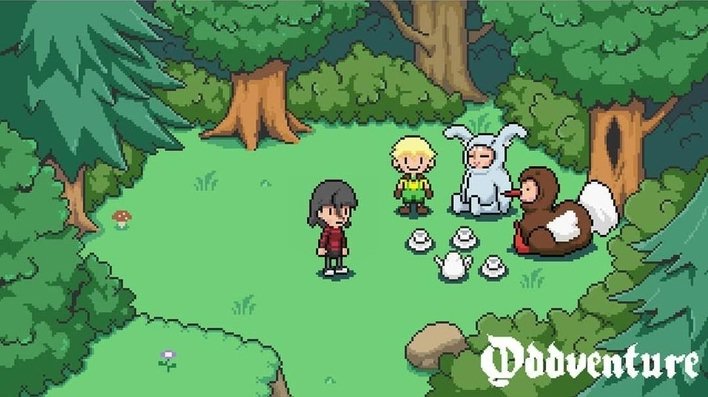 LET’S START FROM THE BEGINNIG. Oddventure is a tale about siblings who ended up in the fairytalish land with one big twist’o at the very first steps of their journey. Charlie, the older sister is a shy, nerdy yet rebelious outcast who has to look after her younger, troublesome brother – Bonzo. See those strange creatures right next to our main heroes? Those are Mr. Rabbit's and his best friend - Dodo! Those two goofy sidekicks (who are kinda medieval furries lol) are my beloved spirit animals and comedy oriented characters. No chance to not fall in love with them on first sight. Trust me on this.

The adventure of two siblings, who enter a fairytalish land.